A Company, made up almost entirely of males, they fight as a loose unit alongside the 1st Regiment of Foot, the Bodstonian Fusiliers as skirmishers or act as a defensive Screen for the Bodstonian artillery.
There is no official Obligation to be a member of the Folks Militia but most able bodied persons are or have been in the militia.
Minimum Age for joining...there is none..basically if you can use a firearm then one can join.
The militia are under a shared command of Jeremiah Cheesman and James Forrester.  In the field the BFM falls under direct command of Colonel Jeremiah Coleman.
As with thier weaponary and uniforms thier numbers vary. There is no lists Held as to who´s in the militia but basically when the Oak Bell (Signal bell near the Great Oak in the main square) is rung at least 30 Militia Folk will attend within 10 minutes and thier numbers can double within an hour. They can, when fully mustered, field twice the number of the Fusiliers. 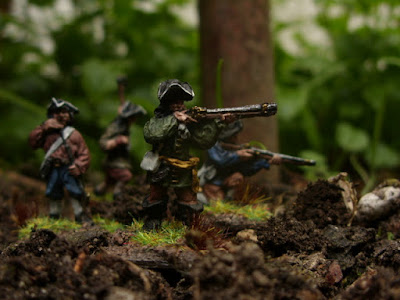 A group of militiamen in a wooded area of bodstonia
Posted by Paul´s Bods at 08:24