As Bodston slowly grows it was decided that the "Bucket Brigade" (see below) was no longer enough on it´s own so a  decision was made to aquire a fire fighting apparatus, a "fire Engine" of the type made  by a Mr. Ignacious Thomas Burns and build a "station" to house it and other such Equipment such as ladders etc. 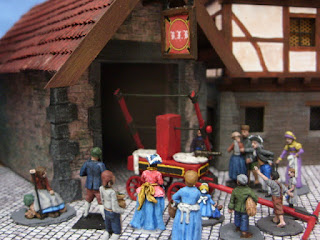 Here we see the Opening day of the new "fire Station" which will hold the "fire engine" made by Mr I.T. Burns. The sign, visible along the highstreet, proudly proclaims the B.F.B, the Bodstonian Fire Brigade.
A Suggestion was made to add a small bell Tower which could be used to raise Alarm but this was quickly dismissed as the Oak Bell is only a short distance away.
A small set of Rooms will be added at some Point so the Station will be permanently occupied.


Bodstonians keep a bucket of water near the front door. Why? These buckets are intended for use by the "Bucket Brigade".
The "Bucket Brigade" is not a permanently organised Group but basically the neighbours and any folk capable of delivering assistance in the Event of a fire and  form a human chain, first using the ready filled buckets from nearby front doors and then use the empty buckets to collect water from any Close by source, Pond or well.

Although the buildings within Bodston are built  with fire prevention in mind, for example, a thick dividing wall which reaches above the roofs of  buildings sharing a wall to stop fire spreading along the Roof tops and the spacing between  houses is to be kept clear of anything that might assist or cause a fire, even a small unintended fire is still  considered an extremely dangerous Event and all who can are willing to come to assistance if and when necessary.


To assist in making water readily available to the fire engine and not to rely solely on a goodly number of citizens who could form the "Bucket Brigade", plans were drawn up to lay  clay pipes  from any deep wells which will run along the centre of the roads. These pipes will have access Points at the sides of the roads and  at regular intervals (the Maximum distance between two Points being no more than 50 "Protectors Yards" )
It was deemed necessary to have Access Points on both sides of the street  in the case of an Access Point  may be made innacessable in the event of a fire next to it.
Work has already started on the pipe laying and is expected to last another year, weather permitting, until the Project is complete.
Posted by Paul´s Bods at 06:42

Email ThisBlogThis!Share to TwitterShare to FacebookShare to Pinterest
Labels: Bits and bobs