It´s now been several days since James and Adahy were last seen and inside the stockade surrounding the fishing town of Boddinton, things are getting tense.
Jeremiah Coleman and Mr Cheeseman are discussing with Company B´s Staff Sergeant, Robert Lambton,  wether to send out a large patrol and if they were to do so, what would be it´s  size and how might that weaken the towns defences. 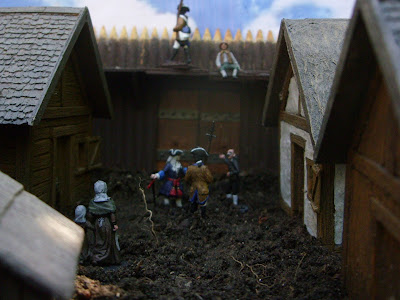 At this Moment the sentry on the watch tells them a figure can be seen breaking cover from the distant woodline....and it appears to be  a Native!!
Quickly the town is called to full alert, all those capable of carrying and using a fire arm Position themselves along the palisades.
Using his fieldglass, Jeremiah makes the figure out to be one of the missing two men,  Adahy!!
Quickly mr Cheesman and Staff Sergeant, Lambton run down to great him.

Adahy tells them that James is alright but being Held at ransom to force a Meeting. He has been sent to lead representatives of Bodstonia to the  place of this Meeting and that they must follow him now.
Quickly Lambton gathers a handfull of his Company together, accompanied by Jeremiah and Mr Cheesman, the small Group sets off behind Adahy. 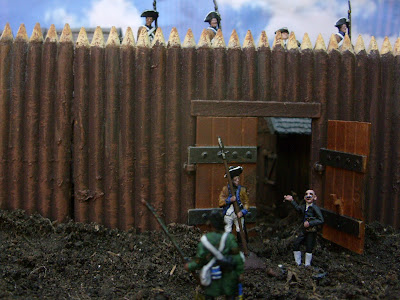 The Party follows Adahy into the forest and after an hour they Come into a large Clearing, on the far side of which is a large Party of natives, James in their midst.
Both groups warily approach each other, weapons held at the ready but after both
Adahy and James assure both sides of no harmfull intent from the other fingers are removed from Triggers and shoulders relax.

After a Long talk it is discovered that the attack on the Trappers cabin was carried out by a handfull of Young braves  from one of the   large Family Groups belonging to the Chinqua tribe.

Thier reason? During the last winter the Trappers had killed beaver and left the meat to the wolves.
A headman from another Chinqua Family Group had discussed this  with the Trappers who said they would in future bring any meat to the natives but word of this hadn´t got to the Young braves of the other Family Group. Thier disgust at the waste of the beaver meat turned to rage when one of the braves got his foot caught in a gin trap set by the Trappers.
It wasn´t a serious injury, the trap wasn´t set well, but this was the last straw for them and  Unfortunately they decided to take the law into thier own Hands.

Upon Hearing about the use of a Gin trap, both Mr Cheesman and Jeremiah Coleman shook thier heads  in  desolation...gin traps are specifically forbidden in Bodstonia and the Trappers would have known this to be the case, it is so written in the Terms of thier hunting licence, which they have read and sighned. 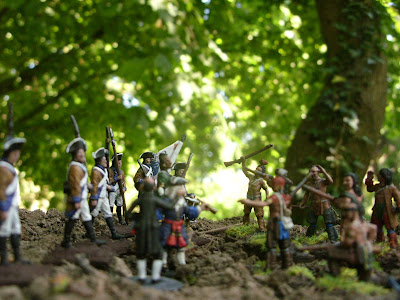 After Long discussion it is decided, there has been hurt  and loss on both sides but as These cannot be measured against each other, "Zacks" injured arm against that of the Natives injured leg, the lost beaver meat against the burnt log cabin,  it is considered that all is equal. As no further harm is intended, no-one had lost thier  life,  both parties consider the matter closed.
They part on friendly Terms.

A week or so later.
The Trappers, Rob and "Zack" ,  have had thier hunting licence revoked and for now work in Boddington as fishermen.

Mr Cheeseman, ever keen to learn more,  has, along with Adahy , met again with the headsman of the Chinqua and arranged to visit their Family Group later in the year.

Jeremiah Coleman and the Bodstonian Dragoons  have returned to Bodston.

And James? He has quietly  gone back to Bodston to write up his adventure, add a bit more to his map of Bodstonia and.......for now.......remain the Apple of Symphonies eye 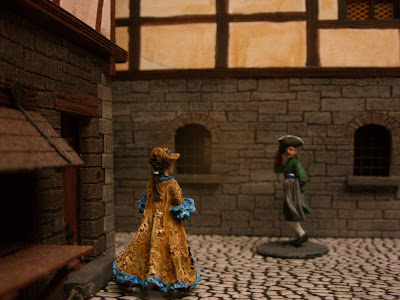 Email ThisBlogThis!Share to TwitterShare to FacebookShare to Pinterest
Labels: Personalities and People, Stories and Settings