In 1685, At the age 41, the descendant of Paul de Bodley, the lord of Styrow on the foam, Jocelyn de Bodley,  set out on a voyage of discovery on board the Galley,  Sea Urchin.
According to the ships logs, they sailed for near on 6 months before finally sighting land. Great cheers arose from the crew, but these soon grew still when they neared the landmass, and realised that it´s coast was one of nothing but sheer cliffs. They sailed for 12 days to the west, and upon finding no landing place, they turned and sailed east for nigh on a full month before finally, when all hope of a landing was lost, a bay was spied.
The ships longboats were launched and raced to the foreign shore.
Upon landing, Jocelyn ran up the beach and raising his left hand, claimed the land as now being under the authority of  Styronia.  The bay, was named Entry Bay.
Realising that a voyage back to the mainland was near impossible due to lack of provisions, the decision was made to remain and reprovision.
A small camp was built upon the flat land above the beach and patrols went in search of water and foodstuffs.
For near a month the men enjoyed the peacefullness of the new land until one night a dreadfull storm raised it´s anger, breaking her ties and driving the Sea Urchin upon the rocks. Luckily she held fast..the handfull of crew still onboard battled all night and finally, as the storm subsided they managed to re-anchor her in the shallow waters near the beach. The damage was not severe but repairs were necessary to allow the return journey.
By now, autumn was approaching and realising that a return voyage in winter was of great risk, the decision was taken to remain. To suit this, a  more permanent residence was required so a small stockade and log cabins were built.

On the 9th of October 1685, a small group of sailors were out hunting when they were suddenly confronted by a large group of natives. Luckily, the man in charge, midshipman Arthur Cobb, realised the indians were not hostile and put himself between the natives and his men.
With hand gestures a conversation of sorts took place, at the close of which, both groups parted company.
The news of this encounter caused some exitement and small concern within the encampment. Sentries were posted, Marines accompanied the food patrols,  although no sight or sound of the natives was heard of for several weeks.
The next contact was at the end of autumn, when three natives, two male, one female came to the stockade, offering gifts of caught fowl and a deer.
Slowly over the next weeks more and more contact was made, the visits by the natives became regular daily occurances, some even set up a small encampment within hailing distance of the stockade.
A decision to remain was made on the grounds that it being better a winter on land as a winter at sea  and the extra time would give them more opportunity to further investigate the new lands Fauna and Fora.

Over the winter of 1685 -86, both natives and Styronians learnt some of each other language and customs. The natives were unsure how large the land was, but told of a mountanous forrested inland, a massive lake, large rivers, other tribes, some of which were hostile, plentifull wildlife but of greatest import, no knowledge of others from the mainland ever having visited.

In the spring of 1686, the Sea foam being fully reprovisioned, the crew, although of heavy heart at having to do so, made preperations to leave for home. At a ships council, it was decided, that if any wished, a maximum of 6 men could remain behind. A guarantee that they would ever be recovered was impossible to give, so only single men could be considered. Under these conditions 6 men did volunteer, thier names being recorded in the ships log as;
William (Bill) Colthurst
Jake Lambton
Larry Merton
Bartholomew (Bart) Rudhall
Isaac Saynsbury
Cyril (Cy) Woodward


On the 11th of march 1686, they finally left, a fond farewell was waved to them from the shore by the natives and thier 6 crewmates.
Near 6 months later, they docked in the port of Styrow on the Foam to a resounding welcome.
News of thier discovery was soon known by all in the land and the great council of Styronia ordered preperations for a fleet of 10 ships to be built and sent to occupy the new land.
After nearly a year, the ships were nearing completion when..in the  late spring of 1689, war broke out. This war was not Styronias want or wish, but as they were part of the northern federation they were obliged to send assistance, troops, and ships to aid thier allies. This meant all of the near completed ships meant for the expedition were quickly converted for war.
Due to the war, the damage to the ships and repairs to the land, another eypedition to the new land was not considered until 1695, nearly 10 years after Jocelyn had stepped onto the beach at Entry bay. 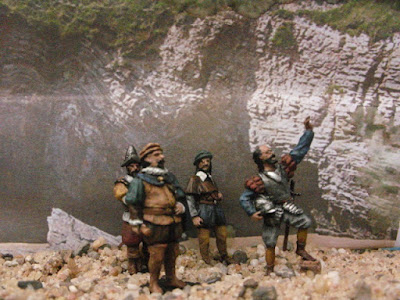 Jocelyn at the front, left hand held high. Behind him is Isaac Saynsbury, and to the fore, Midshipsman Arthur Cobb.


In June 1691, Jocelyn was killed in the 1st federation war, leaving his wife Maria alone with thier two young sons. As custom allowed, Maria kept her Husbands sir name as did one of her sons but the other took her fathers name...Forrester. A grandson, James Forrester was born in 1710, in Bodstonia.
Posted by Paul´s Bods at 04:11