Jeremiah Coleman  has got a new Coach. Well, it doesn´t actually belong to him (although he is rich enough to buy several ) but it is the property of the bodstonian Folk and "loaned" for use to members of the bodstonian council.
When not in use for council duties (not that often as most of the councillors already have thier own) it is used to deliver post to the citizens of Bodstonia who live in outlying homesteads and farms.

If a councillor borrows the Coach,  part of the conditions are delivering any mail along the way, a duty to which None of them are contrary as it brings them in contact with thier fellow citizens.

Here we see Jeremiah on a Country jaunt.
He has stopped to talk to a passing felow bodstonian, maybe he has some mail for him. 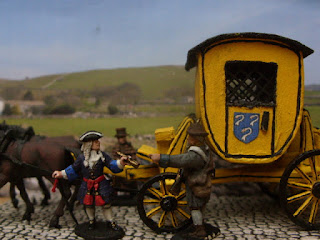 Email ThisBlogThis!Share to TwitterShare to FacebookShare to Pinterest
Labels: Personalities and People, Transport and Trade