Here we see a  6pdr and a 20pdr held in the town´s main fort. 10 pieces in total, six 6pdr´s and four 20pdr´s.
Rarely are these guns taken outside of the fort, the Bodston Fusilers having two 2pdrs that are intended to  escort them into the field.
Along with the Folks Militia, the artillery and the Marines of the Fort are under direct control of the  Lord Protector, Bartholomew Motesfont 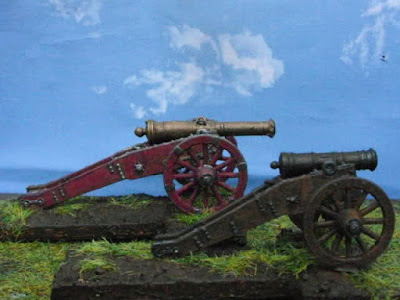 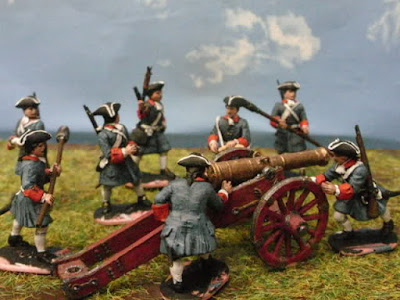 On this occassion we see a team of the gunners from the fort out for a range day, testing their skills as a gun team in not only hitting a target but the time in which it takes to re-load thier guns.
Generally only two of the 6pdr´s will be used on a range day along with two teams chosen from a rota system.
Each team vys to better the other, the punishment for the loosing team? They have to supply the winners with free ale that evening..with drinking bouts going on long into the night, this can be expensive, not only on the purse but on the next days constitution. The reason why gunnery practice is held on a saturday and then,  not every saturday!!
These "shoot downs" have become a small event in Bodstonian life. A small fair is set up near the range with people turning up from far and wide to see which team comes out trumps. Bets are placed and an unnoficial  "Team League Table" is created each year, the top team recieving a small purse and a gold plaque which is  attached to the winning guns carriage.
It has even drawn attention of the "upper orders" with a party being held in celebration on the weekend of the last "shoot down" the so called Cannon Ball.
Posted by Paul´s Bods at 09:09