Jeremiah  Cheeseman, Born 1679, referred  to by  his pupils (the cheeky less studious ones) as "Cheesy" or more indearingly, especially by former Pupils  as "Old Cheesy" is the towns School teacher. With his wife Cordette,  he runs the little school of Bodston. The school bell will ring at 07.30 and the pupils are expected to be in thier seats by 08.00 prompt and ready to learn until 14.30, 5 days a week.
The class sizes vary, schooling not being compulsory and the lesser well off, especially during the harvest,  keep thier children away to help with the extra work.
He teaches maths, English and history. He also teaches some science but this only to the older pupils and mainly to the boys.
His wife Cordette, Born 1681,  teaches Sewing and Drawing..mainly the use of colours rather than anything technical.
He is definately old school,  so the pupils can expect a piece of chalk to whizz in thier direction for small misdemeanors and 6 of the best for major ones.
Mr Cheesemans other role is that in times of emergency he acts as a doctor. Though not trained as one and lacking expertise in matters such as medicines, he has some knowledge of the internal workings. He can,  to  satisfactory degree,  fix a bone, remove a musket ball and has through his efforts saved the life of many a fellow  Bodstonian.
Jeremiah is, alongside James Forrester,  joint commander of the Bodston Folks Militia 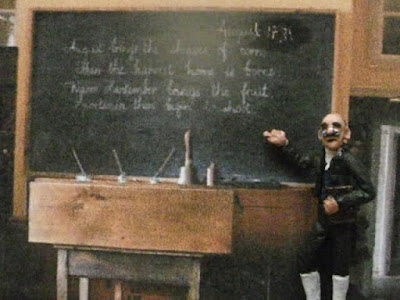 Mr Cheeseman teaching an english lesson. For the sharp eyed among you you can see that it is  late summer, August in the year 1731 to be precise 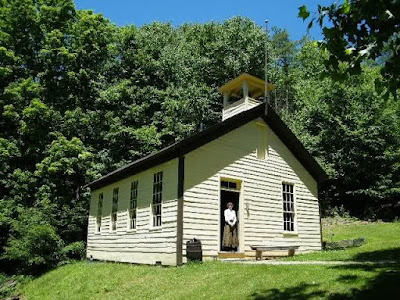 The  Bodston School house with Mrs Cheeseman standing at the door. 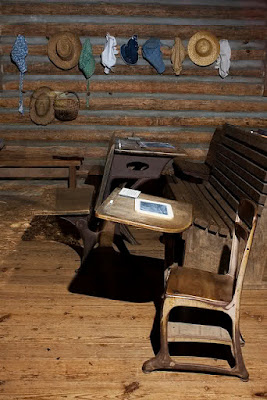 No shuffling of feet or hiding of "illicit" objects in this school. Seats designed to keep backs straight and benches for older children to sit next to and aid the younger members of the class.

The Cheesmans where married at the turn of the century, 1700 and have no children of thier own.
Posted by Paul´s Bods at 03:49